Now That Craig Nagel Has Become A Bullet Crafter, I Guess, Once Again, I’ll Have To Share Some Secrets Here

It seems that Al Nyhus has sold his bullet making equipment to Craig Nagel, thus siphoning yet more fuel from my ever diminishing, “outrageous income”! 🙂 Therefore, in the interest of promoting a continuation of [the tradition of] semi-respectability, I will be posting a series of pics & brief explanations to this thread – ‘the way I do things’ – bear in mind, there ARE other ways! 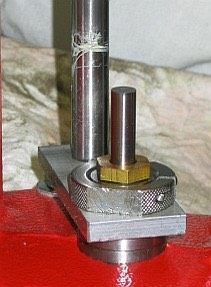 This initial set will show my original [bullet making] conversion of the Lee Classic Cast press, which, “blows” ALL other presses of the proverbial water! The Lee presses feature the BEST axial and radial alignment of ANY commercially made press, AND, their design lends itself to EASY modification! 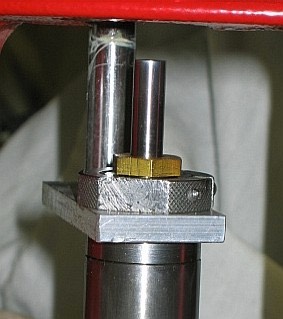 This pic (left) shows all of the parts: from left, a Hornady 7/8thsX14 lock-ring, which locks the ejector frame onto the ram-adapter; the brass punch-holder nut; a Niemi core-seat punch; behind that, the ram-adapter, threaded to fit the ram-bore thread (bottom) and the Hornady lock-ring (top). The adapter is bored and threaded to hold punches and the punch-nut – all pretty simple. Below, the assembled parts should clear-up any confusion. The ejector-frame (base) plate is bored to fit over the 7/8thsX14 threaded tenon, and held tight with the Hornady lock-ring, for stress-free punch holding/floating (note: O-rings limit the “float”); the ejector-frame rod is threaded into a hole in the base-plate, and guided by the oil-lite bushing held in the “flange” mounted at the top – simple, rigid, and effective! [smile][cool] 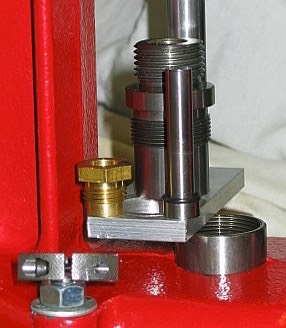 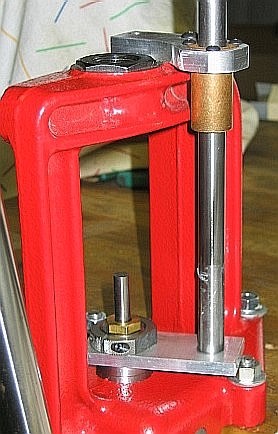 These pics are of my first attempt, which, to this day, works quite well! The idea of using the Lee Classic cast presses came from [the late] Ferris Pendell – he was not your average idiot!

I believe that George Ulrich still offers these parts, ready made, and, probably, compared to my crude crude parts, much improved/refined.

Craig, per our conversation, you probably won’t want to pursue this approach – you can simply craft a ram-adapter which mimics the ram on your Blackmon press – that is, simply mill a slot and a female thread for the Blackmon die/pin-stop. The stop-pin holder/locator may prove slightly more challenging – but, you’re more that up to that!

Still, for those interested, here are some pics of my die-holders, which invert the Blackmon dies, to match the way Pindell;Niemi;Ulrich;other dies work – that is, “right-side-up” , with the die body held (stationary) in the 7/8Ths X 14 thread, and the punches held in the ram! 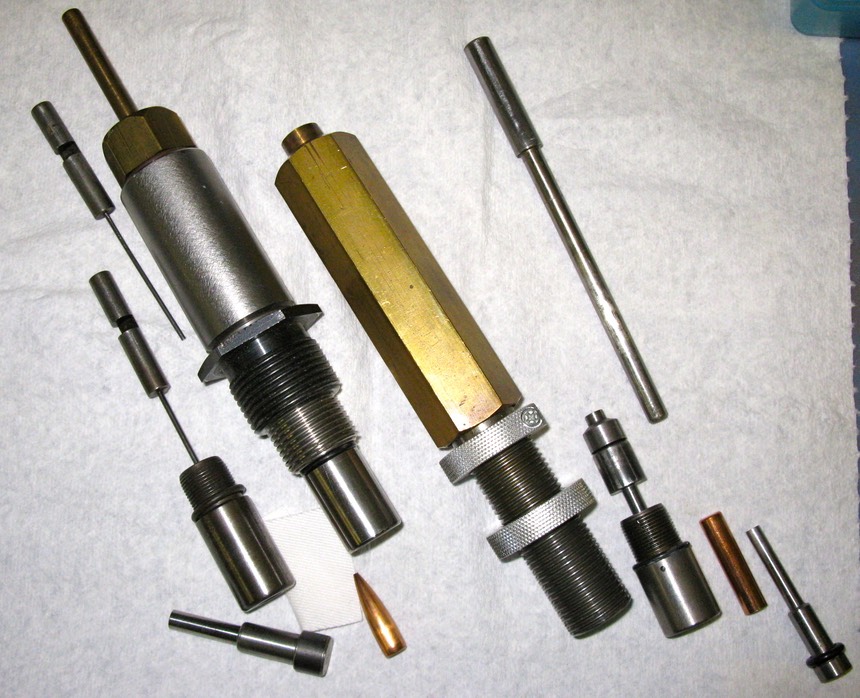 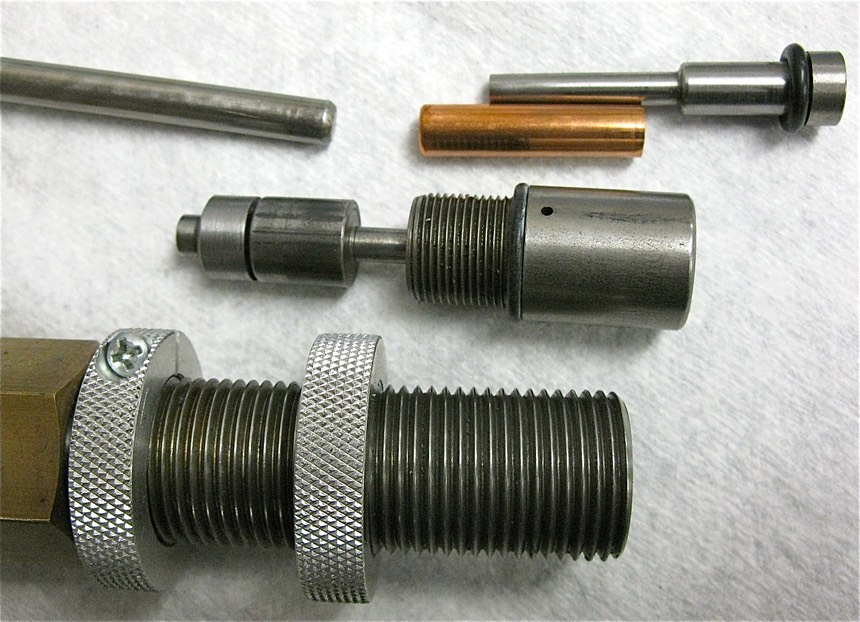 Above: a close-up of the Blackmon core-form die and the BIB die-holder; the core-seat die interchanges with the core-squirt die . . . 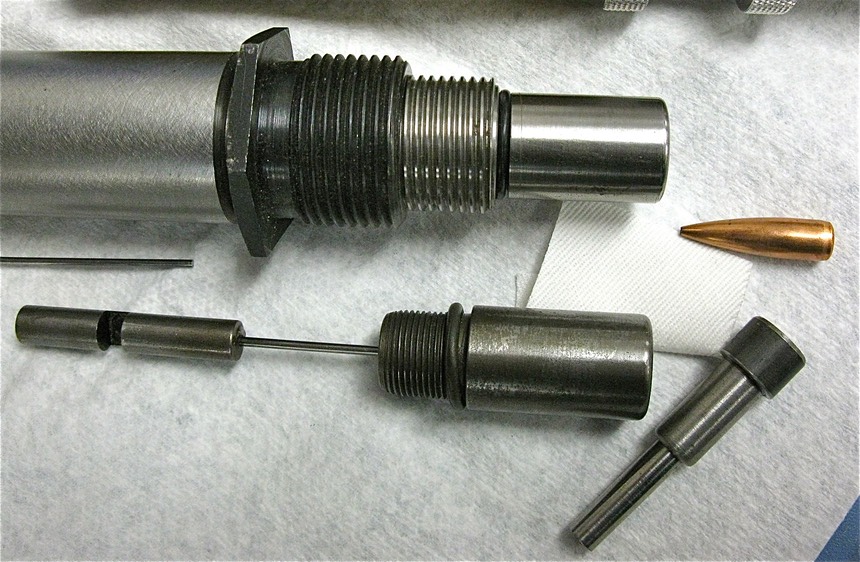 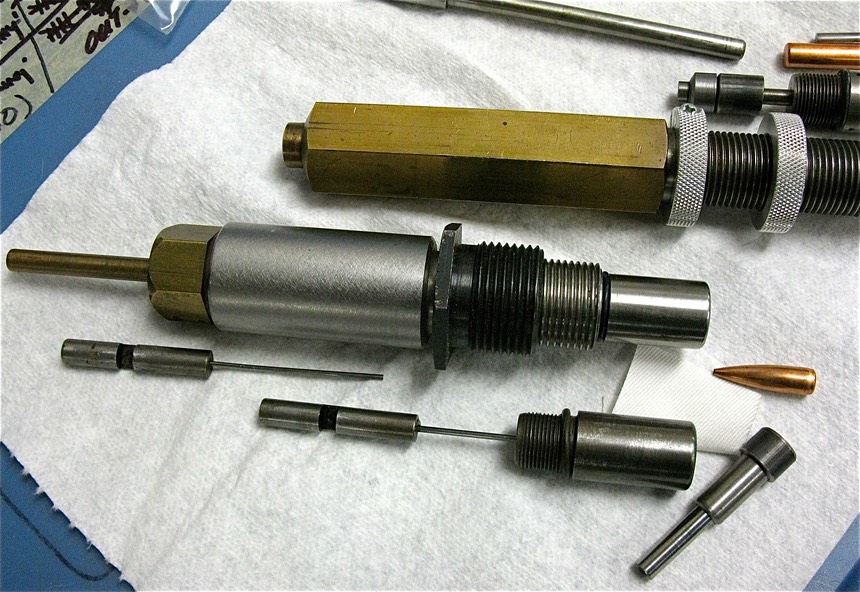 Above: another over-all view of the bodies/dies.

As you can guess, I made these using materials which I had laying around in the shop, – they are similar to the way Pendell made his dies – the 7/8 Ths X 14 threaded die-holders could be used to interchange between dies. I’ll try to make time to provide a brief explanation of each pic. RG

P.S. For dies which are seldom “moved”, purchasing extra thread adapters is a simple and cost effective solution: as in the second pic from bottom, the adapter is locked in place, thus, when the die is screwed back on to the same press, the ram/die/punch relationship is retained. This is especially nice for FL resizing and, if bullet making, for pointing with a variety of dies and one press, while maintaining constant length. For operations where the die is constantly changing, say, coring differing weights/lengths/calibers, it’s obviously not as necessary. Again, compa[wink]red to the competition,Lee has the fit and alignment well under control.

“It seems that Al Nyhus has sold his bullet making equipment to Craig Nagel, thus siphoning yet more fuel from my ever diminishing, “outrageous income”! [wink] “

Yep…..Craig picked up all the bullet making gear and doodads that I’d accumulated over the past years. I spilled all my bullet making knowledge (that took 3 minutes) and gave him strict instructions to call you when (not if…when) he sticks a bullet in the point die. I told him 2:00 A.M. was the best time to call ‘ya. [wink]

Just kidding, of course. The years making bullets was a lot of fun and filled with learning. I greatly appreciate all the help you gave me, Randy. When I was pondering some subtle nuance of lube, tumbling time…or whatever had my brain in a storm at that juncture…a call to you made everything clear again. Shelter from the storm, so to speak.

I like the flick, Al! [biggrin] I especially relate to the Grim Reaper and the Angel – neither being able to decide where to put me! [tongue]

Craig is working on a conversion, which looks quite GOOD – perhaps, when he’s finished, he’ll post some pics! He’s too clever – almost semi respectable at times . . . [cool] RG