OK, Stan made me do it! A while back, Stan asked if Id submit a ditty on bullet making since the pic posting is now legal, we decided to use the more effective picture is worth a few words version . . . after receiving and unpacking, this is the first step in making BR quality bullets. This spool of .250 diameter lead wire will be cut into aproximately 130 pieces, each about thirty-inch long. R.G. 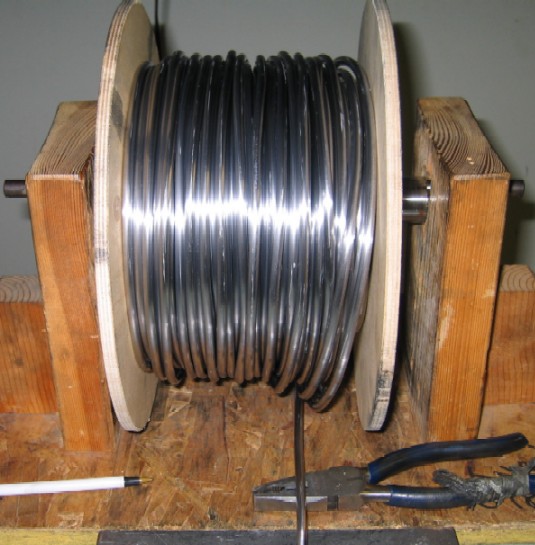 Now, heres a really neat machine built by my Uncle and BIG MIKE

This is the core cutter: we made it using scrap steel and borrowed the crank shaft out of a 1966 Yamaha motorcycle to get the desired reciprocating-motion slide. When properly JUICED, BIG MIKE is capable of cutting well upwards of 3000 cores per hour - it was really a bummer having HIM dead for several months his ability to do the boring and hard physical labor makes it almost worth having Allen Huff bring HIM back to life!

As you doubtless deduced, the sticks are inserted, then fed via gravity straightness is a virtue here! The crank, for now, is powered by the human (we use the term loosely!) hand! The bucket contents is the result of loading the cutter and truning the crank wheel this time, cores for 112 GR. thirty caliber bullets about 2500 to the bucket. ;) R.G. 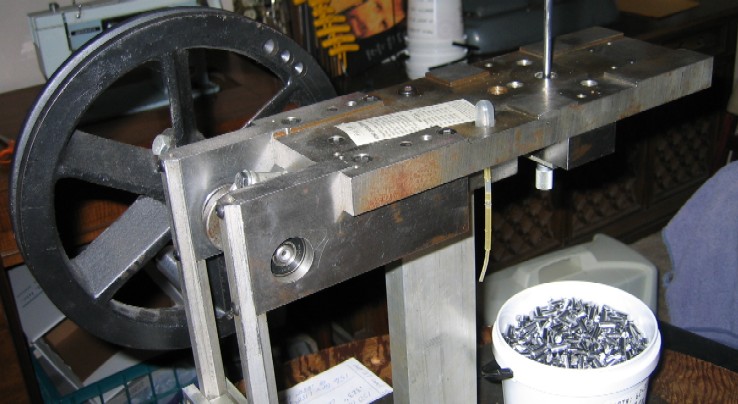 a clever design, which, using recorded micrometer settings, allows us to get very repeatable length when changing through the length/weight cycle! R.G. 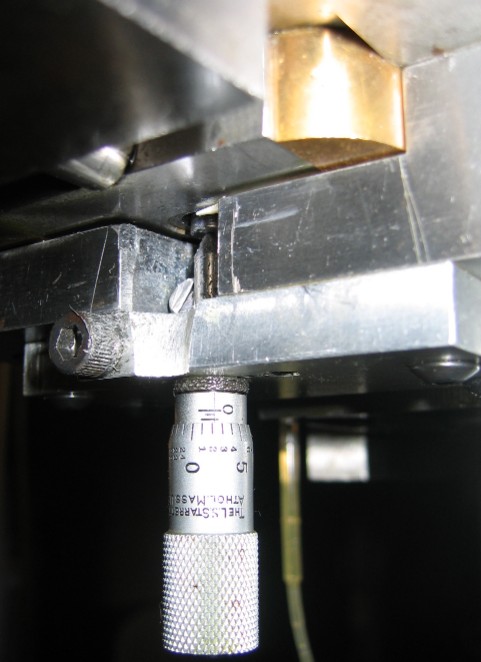 And heres a closer look at the just cut cores . . .

note the relatively clean shanks & square, unflared ends! This bucket contains roughly 2500 cores: comparatively, a trip to Grand Island, NE and a tour of the Hornady plant will reveal cores being cut and squirted via a single operation and deposited into 50 -100 gallon livestock watering tanks!

Upon my first tour of a commercial plant, I lost all feelings of guilt about the cost of custom hand made bullets when one totals the amount of labor, feel and culling that goes into them, custom hand made bullets represent one of the best BARGAINS on the planet! At Hornady, each press produces 50-55,000 [FINISHED] bullets per 10 hour shift; a maker of hand crafted bullets, at best, may make 3% of that number during a 10 hour span! Yep, hand made BR quality bullets are a labor of love and should be purchased via the following critera: 1) QUALITY; 2) availability; 3) price.

There is no reason for a maker of hand made BR quality bullets to negotiate on price his time is worth what one receives from the bargain! R.G. 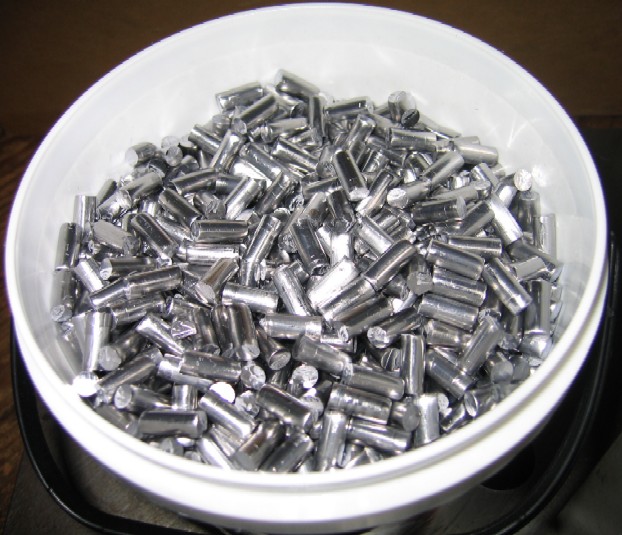 Stan Ware: Randy, a post or two back you said the cores were cut into 30inch lengths first and straightened. Why do you cut to 30inch lenghts ? What is the reason for this ? Why dont you cut into 1 inch pieces from roll ?. Dumb question but I dont know.

Randy: Stan, the wire is cut into 30 lengths (sticks) and then straightened, following which it is fed into the core cutter and cut into the individual individual cores I probably used the wrong terminology. If you look at the previous core cutter pic, youll see a stick of lead wire sticking up -its toward the right hand end of the contraption. The cut cores are also ejected by gravity - the white tickler brushes the cores as the slide moves forward and dislodges the core from the cutter bushing. R.G.

How do you straighten the 30 sticks? Roll them between metal or hardwood plates? Tks greg

Randy: Greg, BIG MIKE may kill ME for letting out the secret . . . WE roll the wire between an aluminum plate, which is equipped with handles, and the plate which you can see in the pic of cutting the wire. The straightening is REALLY a DRAG! :( Eventually, we will have the new cutter hooked up to a feeder/straightener and the wire will be cut into core slugs right off the roll! Well, thats the DREAM! R.G

Jim Saubier: how much of a nub do you use at the end of the 30 section. i imagine that every section you will lose a little from the feed end. your cutter looks real slick, we are using the manual deal and it isnt quick by any means.

Randy: Jim, Since I cut all of the sticks using diagonal-cutting pliers, the ends are, indeed, waste. However, Only about 1/8th inch on the beginning end - the final core may be too short. I have attached a pic of my old reliable CH cutter (it was part of the deal when I scored my first set of dies a GREAT set of Rorschach .22 Cal.); I still use this cutter for 22 and 6mm cores . . . and occasionally, an odd lot of thirties. AS with the cutter my Uncle and I dreamed up and built, the CH cuts very square ends which are free of bulges and/or flaring this makes squirting much more user friendly!

Using the CH, BIG MIKE can only cut about 50% of what he cruises at using the new cutter! But since I put it close to the tube, hes much happier! ;) R.G. 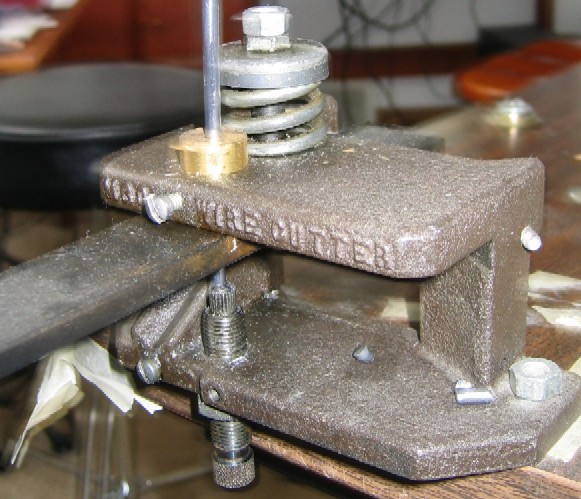 K. Skjerdal: With the cost of the lead and the jackets, and then all the hard work to form the lead into cores and point things up, (your press forearm must be getting HUGH by now and we will have to start calling you Popeye), plus the cost of maintaining the shop, the equipment, buying new point up dies and new bases, cleaning and lube supplies, drying towels, and on and on, at $240/1000, your bullets are the best bargin in BR!

Wait, what the hell Im I tell this to you for, you are going to start charging us more

Keep up the great job buddy.

Randy: Keith, thank you for your kind words. THis is true of even my friendly competitors bullets: hand swaged BR quality bullets are a REAL deal I cant remember the last time I saw any of the Name Brand bullets at the TOP of an equipment list! R.G.

Jim Saubier: thanks Randy. We use the same spools of Star lead on a rack suspended from the ceiling. we have a bench set up that is 6 long with the cutter on the end of the table. We pull off sections from the spool, straightening, wiping crud from the wire and then cutting. We used to do it in sections but always had a nub at the end. Our cutter is a very simple cutter from Niemi, but is certainly not as efficient or fast as it could be. It is neat to see how others are doing things. ive only seen 2 other set-ups for bullet besides our own. Seems that everybody develops their own way of doing certain tasks. If I had to make the number of bullets that you do, id sure want to automate any of the process that i could. I dont see the demand for .30 caliber bullets slowing any time soon.

Again, thanks for sharing. you have been a tremendous help and source of information in regards to bullet making, shooting the .30s, and br shooting in general. Even for folks that have the equipment, use the equipment, etc. it is nice to see how the good guys are doing it. you have always been very free with information, helpful in every way for somebody getting started. i thank you for that.

Randy: Jim, thank you for the considerate words. My pal, Terry Meyer, uses the sam approach as you that is he cuts the cores straight from the roll, which is suspended from the ceiling . . . I just didnt get along well with that method. I prefer cleaning the sticks for me, it hurts the shoulder less. Mike Bigelow straightens his wire via pulling/pushing (?) through sets of perpendicular wheels mounted on a section of aluminum angle it works very well. Yes, there is always a new way to skin cats! ;) R.G.